Having won the County Heat in May, WPRC again represented Herts in the Astor County Championship final at Bisley on July 12th. It is most rewarding not only to record an excellent Team Best performance of 15th ex 22 with a score of 611.59 also a TB, but also to note the commitment given by team members Mike Carlin and Richard Malet.

As reserves they travelled to Bisley with little hope of shooting but to support the team as register keepers gear carriers and general back up. Their attitude typifies the spirit in this club and their inclusion on the front row of the team photograph says it all. 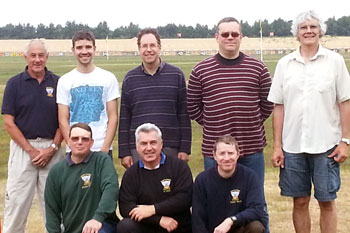