Our traditional four distance EOS competitions were thrown into turmoil this year when they were held on Sunday 13th October supported by ten dedicated members. The appalling forecast for once was wholly accurate. The heavens opened as we assembled to shoot the first 300 yard detail at 0830 and continued unabated.

Struggling to see the targets and shooting from lakes of water on the firing point we finally abandoned after the second detail at 300 yards after nearly three hours in the pouring rain.

After drying out and cleaning rifles, we repaired to the caravan for hot tea and by mutual agreement decided that we would defer the remaining three details to the last shoot of the year booked for November 3rd. We were however able to present some prizes.

The Warm-Up 300 yard shoot (rather an inaccurate title this year!) was won by Colin Skellett on count back from James Greenway with a 34.4 Prizes for the concurrent comps shot throughout the season were also presented to Richard Malet for the Donegall Trophy; to Colin Skellett for the Crossley Cup; and in absentia to Nick Verduyn for the 7.62 Trophy and the Morrison Salver. 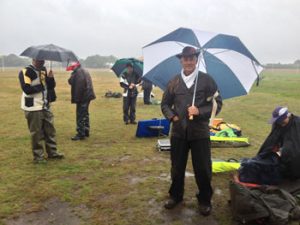 With prospects of a dry and clear day ahead we reassembled three weeks later to complete the EOS competitions. Conditions were indeed dry but strong winds taxed all shooters throughout the day, making for some demanding wind strength decisions. All shooting had to be completed at 600 yards due to restrictions in target allocation. With a good mix of experienced die-hards and newly qualified members, competition in the handicapped events was fierce. In the final analysis youth and very steady shooting prevailed.

Colin Skellett was the sole die-hard winner with a score of 193 to beat Bob Jackson in the Holland Aggregate Shield. Paul McNamara was pushed hard all day by Alex Joyce, also newly qualified, but prevailed to scoop all three of the remaining club Trophies. Pemberton Cup, Rosebowl and overall handicapped EOS Aggregate Tankard were his for this year

A Popular and well deserved win, underpinned by an excellent 300 yard shoot in appalling conditions on day one. Well done Paul.