Many of our EoS shoots attract a good attendance and 2011 did not disappoint. Eleven members attended and after early morning ground frost and mist had burnt off, we were treated to one of those glorious Bisley Autumn days. We even had a full herd of deer on Stickledown in the late afternoon complete with magnificent stag trying to round up his considerable harem. 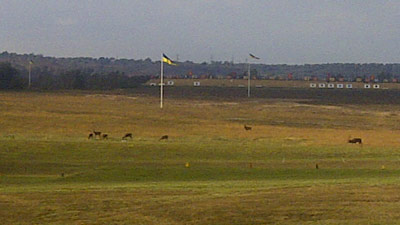 Light but deceiving winds, warm sunshine and long shadows as the day closed made it a memorable day. Despite what appeared to be benign conditions, there were devils about! Most shooters shot well, but all were caught out on at least one of the ranges. Few exceeded their handicap – a rare occurrence at the EoS.

Colin Skellett managed a possible 200 ex 200 in the Morrison and Ashley Coleman-Cooke won the Donegall leading a group of three who were the only competitors to beat their handicaps. In the competitions shot on the day, honours were evenly spread. It was good to see Anthony Lewis and Allan Skellett back on the range after an absence of a year due to other commitments. They exceeded expectation (certainly of their fellow competitors) by walking away with three of the five prizes. It must be said that their practice on the small bore range was clearly of great benefit, and with Allan currently Captain of the University team at Southampton we should have guessed that a ‘surprise’ was in store. Despite an increased handicap for 2012 we all hope to see them both return to Bisley with WPRC next season.

The Holland Shield (Club Championship) was again a closely contested event. Two points separated the top five and a tie on 191 ex 200 between Nick Verduyn, Colin Skellett and club captain Alistair Bullen was decided by   a single V bull, with Alistair taking the honours.

Prizes were presented after shooting and details of all competitions were as follows: