Our last club shoot of the season on October 25th dawned cold and bright in the autumn sun, welcoming the six shooters to this first day of the winter time change.

Remarkably calm conditions always looked good for high scoring but what was about to unfold for James Greenway exceeded all expectations.

At 15:45 and despite continuing fine weather, the light was fading fast. Shooting alongside Richard Malet, he ‘nudged’ his second into the bull ring but proceeded to hold his nerve for the next seven shots, remaining resolutely in the ‘V’.

Everybody watching knew the score and another V followed with a final 50.9 accompanied by a big grin and a thumbs up from James on the firing point.

What a great way to finish the season. What a performance. A Fantastic effort James. 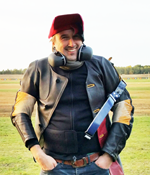