With this event moving several weeks later into early April to try and attract a better turnout our plan seemed to have worked. With 17 competitors it proved to be a recent record, nobody being able to recall such a well attended HRA season opener.

WPRC were well represented with their Clubs Shield team of six all entering this individual handicapped competition, held on the morning of Sunday April 5th. We can report mixed fortunes as the results below will show.

However our penchant for providing winners did not leave us disappointed with Colin Skellett cleaning up both the Top Gun Score and the overall Handicap prize. Scores were tight at the top and our Richard Malet made a score well over his 2008 average to finish in third place only just behind Phil Northam from Watford R&PC.

The picture of the top three tells it all. 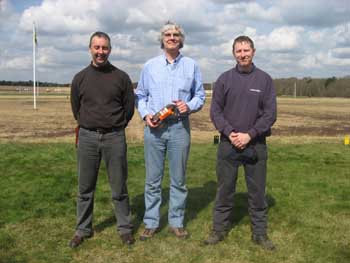 WPRC performances were as follows:

Records will show that WPRC have provided the winner in this competition for five of the last six years.

A Full results table can be viewed on the HRA website at www.hertsra.org.uk