Following recent years where we were challenged by foul weather, our hopes of a fine Imperial Meeting were rewarded. Tricky winds of course but dry and not overly hot days welcomed our squad of six from WPRC. The usual culprits Nick Verduyn, Colin Skellett, Ashley Coleman-Cooke, Alistair Bullen and Bob Jackson set out to do battle.

Bob was an early casualty and following a physically painful Astor Final on the first morning he was forced to withdraw from all further shooting activities. This followed a fall two weeks previously, onto his left elbow from the sixth rung of a ladder. Motto – Don’t do DIY for sons or daughters!

Representing Hertfordshire again, WPRC made their best score ever in the Astor County Championship Final with a 611.59. A satisfying 16th placing ex 22 was also a team PB.

For the first time in many years we decided to enter club teams in both the Belgian and Steward competitions. Nick, Colin, Ashley and Alistair produced some competent shooting against very strong opposition. Results as follows:

HPS crosses for maximum scores were hard to come by but success for Nick, Alistair and Colin was nevertheless very satisfying this year.

Alistair by his own high standards had a muted TR Meeting with three Prize List placing’s. As vice-captain of the Norfolk county team he joined in their success in winning the County Short Range championship. His high point however was on the Running Deer range where he won the Dewar Trophy, so as captain of the BSRC he was certainly leading by example.

Nick made eight Prize Lists. He finished in an excellent 144th position in the Grand Aggregate and battled through the qualifying stages to post an excellent 61st placing in the St Georges Final. Well done Nick.

Colin was not to be outdone but he did keep us waiting till the last two days. He had also posted eight Prize Lists in the preceding competitions but the first major success was a win in the Chairman’s Prize ensuring more ‘Senior Silver’ on his mantelpiece. He may however consider that a Queens Prize final was the jewel in this year’s crown. It is every shooters goal to make the illusive Queens Final and his 58th position was a fine ending to another successful week. 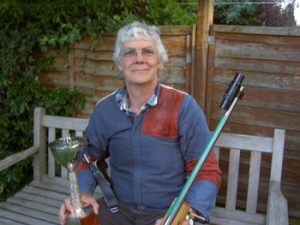 All in all some very satisfying shooting performances were recorded.