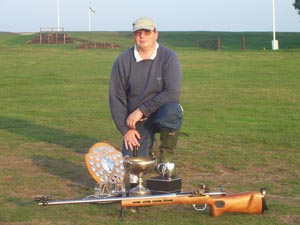 The weather forecast for the 2006 End of Season shoot promised a dry day and as luck would have it the forecasters were correct. The day started out overcast, but without the fog of the previous few mornings. Turn out was less than last year’s EOS shoot, with the 6 of the 7 confirmed attending members assembling prior to the start of shooting. As well as an empire match, the EOS shoot includes a handicap pairs competition. First item on the agenda was to draw the pairs using the time-honoured system of drawing names from a hat and as there was an odd number, one shooter was going to have to be paired with himself.

The draw resulted in some interesting partnerships, with the favourites being either the combination of Colin Skellett and Nick Verduyn or Mike Hayden who was teamed with himself. Colin, Nick and Mike all have the ability to shoot to their average or better, so it almost seemed a certainty that it would be between those two pairings.

The first drama to unfold was not on the target, but the fact that the marker for our target had failed to turn up. Following a visit to the range office, the marker on the adjacent target doubled up to mark our target as well. This could well have slowed proceedings, but thankfully the marker was superb. The warm up shoot of 2 convertible sighters with 7 to count at 300 yards saw Colin, Nick and Mike all return an HPS of 35 with Nick taking the honours with a vee bull count of 5 ex a possible 7.

The morning started to brighten up as we started the Empire match with 2css plus 10 to count at 300 yards. Good steady shooting from everyone, with Nick shooting another HPS. We then fell back to 600 yards to shoot 2css plus 10 to count, but since we had lost time whilst the marker was arranged, the shoot was truncated to 2css plus 7 to count. Strong shooting from everyone again, with Mike joining Nick in shooting an HPS at 600 yards. That was the short range over, long range after lunch!

The afternoon started off in the same vein as the morning, no marker! Well, the marker was in the butts, but due to a slight logistical error was not on the target that we expected. Communication with the butts secured the services of a marker on the appropriate target at 900 yards, but the marker was isolated from the butt supervisor and a radio, so the order of the day was don’t miss the target!. Again we were blessed with an attentive marker, and good light conditions. Everyone shot above average for the 2css plus 10 to count at 900 yards, with Alistair Bullen shooting the only HPS.

As soon as the last detail had finished at 900 yards, the first detail were on the 1000 yard firing point, and a runner dispatched to retrieve the lone marker. Light conditions changed to give a poor sight picture, with the black aiming mark becoming more like a grey blur. The wind appeared to be more fickle than it really was, which caused a bit of an upset. All the south paws were on the first detail, with leftie Dick Hayden showing the rest of his detail how it should be done. His fellow shooters struggled with the conditions, as did those on the second detail. Alistair joined Dick in shooting above handicap in the third and final detail at 1000 yards.

Now to calculate those handicap scores. After 900 yards, Mike Hayden paired with himself was just ahead of Colin Skellett and Nick Verduyn, however there was a complete change of fortunes following the 1000 yard shoot. Alistair Bullen and Richard Malet took the handicap competition, followed by Dick Hayden and Paul Knight. Steady, consistent shooting was rewarded!

Prize giving followed the shoot and after a remarkably consistent season from our Captain, the EOS competition results were really no surprise. Alistair Bullen has lead from the front all year and thoroughly deserved his almost clean sweep.